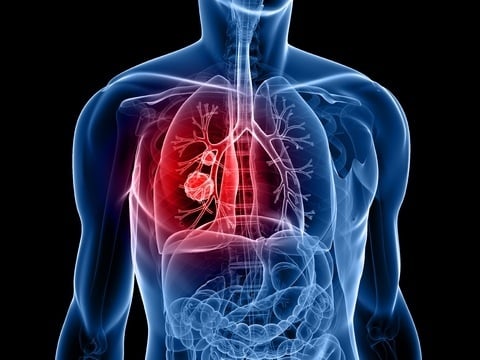 Currently in the UK there is only a 30% one-year survival rate, a third dying within 90 days of diagnosis. A significant part of the problem is catching it early, symptoms are vague and unspecific with patients less likely to seek help from GP’s as although it affects smokers and non-smokers, it is still widely viewed as ‘self-inflicted’ (high proportion of cases are smokers).

New research (TRACERx) conducted by Charles Swanton and his team at Cancer Research UK has shown that key genetic factors which lead to cancer can lie dormant for years, giving hope for early detection. The team took biopsies of tumours of sufferers, looking at cell mutations which occurred in all regions and those present in some. They were able to identify linked parts of the ‘evolutionary tree’ of lung cancer which they constructed of two ex-smokers. This showed that key genetic mutations had occurred 20 years earlier when they still smoked before symptoms had arisen.

After comparing results of the genetic profiles, it was identified that there is increased genetic diversity once the cancer had begun to develop. Designing a treatment plan would be difficult due to the fact that some cancer-associated mutations were present in all cells of a particular region of the tumour but not in others, each suggesting different routes of treatment.

What triggers the cancerous cells from dormancy to proliferation is still unknown. Suggestions were that it could either be a last random mutation of a cell or perhaps changes in the immune system taking place which weaken it and therefore allow it to spread.

It is clear that there needs to be improved diagnosis. This could be from annual lung cancer screening for those at high-risk or detection via blood tests (revealing mutated DNA in the blood). At the moment, 4 out of 10 patients are diagnosed in A&E  and a study showed that few GP’s order chest X-rays as there is a stigma that it they must ‘prove’ the need for it. An ongoing early intervention strategy in Leeds (for the past three years) has resulted in a 2/3rd increase in the number of chest X-rays referrals once they had encouraged GP’s in the area by them acknowledging that it is a cheap method and also is only low dose radiation. Of course it is hard to show that a screening programme clearly saves lives, it was pointed out that higher socio-economic groups tend to take part in screens however lung cancer is more prevalent in lower socio-economic groups.  Another suggestion is to have a system in place whereby patients are able to bypass primary care and self-refer to chest consultants which is currently implemented in Sweden where there is a one-year survival rate of 46%.

In conclusion, interventions at early stages could improve the prognosis for many.

Image is the property of the respective owner, no copyright intended.