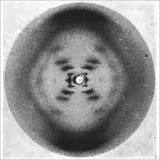 Over the summer I visited the Photo 51 exhibition at Somerset House in association with King’s College London. It was there to celebrate the 60th anniversary of Photo 51 which was crucial in the discovery of the structure of DNA. Photo 51 is an iconic image in scientific history, it is the X-ray diffraction image of DNA which was taken in May 1952 in the lab of Rosalind Franklin by her PhD student Raymond Gosling.

X-ray crystallography was used to produce images by sealing a small sample of hydrated DNA in a camera, in front of a piece of x-ray film. An X-ray beam then shone at it for more than 60 hours. The beam of X-rays scatter and produce an image from which a 3D structure can be determined. In the lab, they had been investigating whether the humidity at which they kept the samples would affect the images. Photo 51 was the image taken at the highest humidity circa. 92%.

The darker patches in the picture show the DNA’s bases which make up the genetic code. The diffraction pattern (cross shape) shows the helical nature of the strands as the arms  of the cross display planes of symmetry. Photo 51 helped Watson and Crick with calculations on size and structure to develop the model of DNA.